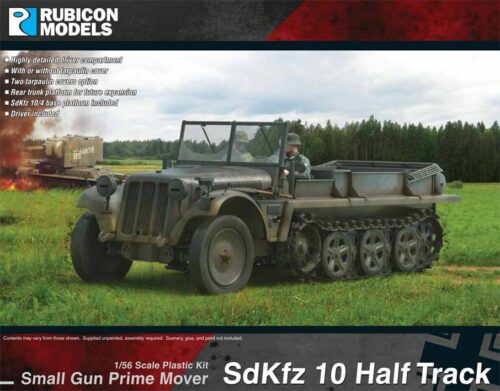 The SdKfz 10 (Sonderkraftfahrzeug – special motorized vehicle) was a German half-track that saw widespread use in World War Two.  Its main role was as a prime mover for small towed guns, such as the 2cm FlaK 30, the 7.5cm leIG, or the 3.7cm PaK 36 anti-tank gun.  It could carry eight troops in addition to towing a gun or trailer.

The basic engineering for all the German half-tracks was developed during the Weimar-era by the Reichswehr’s Military Automotive Department, but final design and testing was farmed out to commercial firms with the understanding that production would be shared with multiple companies.  Demag was chosen to develop the smallest of the German half-tracks and spent the years between 1934 and 1938 perfecting the design through a series of prototypes.

The chassis formed the basis for the SdKfz 250 light armored personnel carrier.  Approximately 14,000 were produced between 1938 and 1945, making it one of the most widely produced German tactical vehicles of the war.  It participated in the Invasion of Poland, the Battle of France, the Balkans Campaign and fought on both the Western Front and the Eastern Front, in North Africa and in Italy.