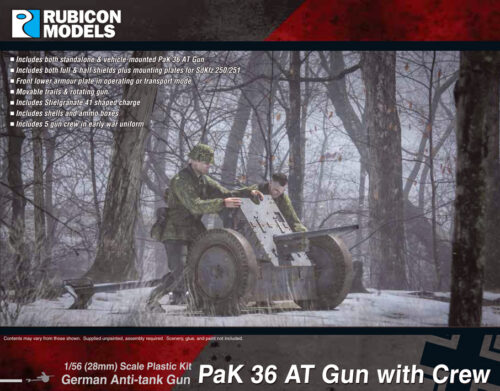 The PaK 36 (Panzerabwehrkanone 36) was a 3.7 cm calibre German anti-tank gun used during the WW2. It was the main anti-tank weapon of Wehrmacht infantry units until mid-1941.

Design of a horse-drawn, 3.7 cm anti-tank gun (designated 3.7 cm PaK L/45) by Rheinmetall commenced in 1924 and the first guns were issued in 1928. By the early 1930s, it was apparent that horse-drawn artillery was obsolescent, and the gun was modified for motorized transport by substituting magnesium-alloy wheels and pneumatic tyres for the original spoked wooden wheels. Re-designated the 3.7 cm PaK 35/36, it began to replace the 3.7 cm PaK L/45 in 1934 and first appeared in combat in 1936 during the Spanish Civil War. It formed the basis for many other nations’ anti-tank guns during the first years of WW2. The KwK 36 L/45 was the same gun, but used as the main armament on several tanks, most notably the early models of the Panzer III. The Soviets used the PaK 36 carriage design for their 45mm M1937 AT gun.

During the May 1940 Western Campaign, the PaK 36, being a relatively small-calibre weapon, was found to be inadequate against heavy Allied tanks. Still, the gun was effective against the most common light tanks of the era.

The addition of tungsten-core shells (Pzgr 40) slightly improved the armour penetration of the PaK 36, enabling it to finally damage the T-34, but only via a direct shot to the rear or side armour from point-blank range. Despite its continued impotence against the T-34, it remained the standard anti-tank weapon for many units until 1942. The advantages of the PaK 36 were its; relative ease of handling and mobility (it could be brought into action very rapidly by as few as two men since it weighed only 432 kg); good quality optics/aiming devices; ease of concealment due to its small size; and high rate of fire.

The PaK 36 began to be replaced by the new 5cm PaK 38 in mid-1941. As it was gradually replaced, many were removed from their carriages and added to SdKfz 251 halftracks for use as light anti-armour support. The PaK 36 also served with the armies of Italy, Finland, Hungary, and Slovakia.

Although the PaK 36 quickly became ineffectual in the European and Russian theatres, in China the gun was still viable as an effective anti-tank gun. It could destroy the Japanese tanks, since their armour protection was quite weak. For example, during the Battle of Tai’erzhuang, Chinese PaK 36s destroyed a good number of Japanese tanks.

In 1943, the introduction of the Stielgranate 41 shaped charge meant that the PaK 36 could now penetrate most armour, although the low velocity of the projectile limited its range. The PaK 36s, together with the new shaped charges, was issued to Fallschirmjäger units and other lightly equipped troops. The gun’s low weight meant that it could be easily moved by hand, and this mobility made it ideal for their purpose.