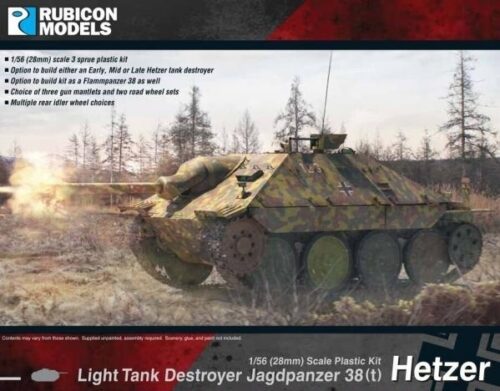 The Jagdpanzer 38(t) was intended to be more cost-effective than the much more ambitious Jagdpanther and Jagdtiger designs of the same period.  Using a proven chassis, it avoided the mechanical problems of the larger armoured vehicles.

It was better armoured than the thinly armoured earlier Panzerjäger Marder and Nashorn with a sloped armour front plate of 60 mm sloped back at 60 degrees from the vertical (equivalent in protection to about 120 mm), carried a reasonably powerful 75mm gun, was mechanically reliable, small and easily concealed.  It was also cheap to build.  The Jagdpanzer 38(t) succeeded the open-top Marder III (based on the same chassis) in production from April 1944; about 2,584 were built until the end of the war.

The Flammpanzer 38(t) was a Jagdpanzer 38(t) modified with a Keobe flamethrower in place of the main gun.  It was deployed on the Western Front, with first use during the Battle of the Bulge.  Less than 50 units were produced.

– Option to build either an Early, Mid or Late Hetzer tank destroyer

– Option to build kit as a Flammpanzer 38 as well