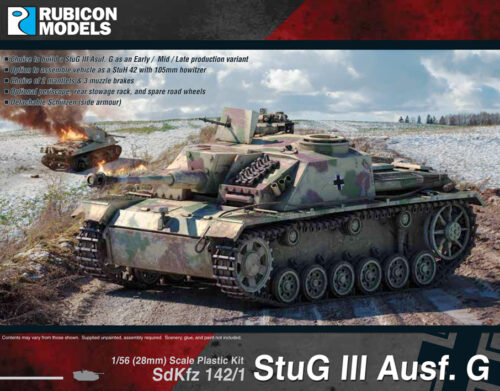 The StuG III was designed to fill an infantry close support combat role, early models were fitted with a low-velocity 75 mm StuK 37 L/24 gun to destroy soft-skin targets and fortifications.  After the Germans encountered the Soviet KV-1 and T-34 tanks, the StuG III was first equipped with a high-velocity 75 mm StuK 40 L/43 main gun (Spring 1942) and in Autumn 1942 with the slightly longer 75 mm StuK 40 L/48 gun.  These versions were known as the Sturmgeschütz 40 Ausführung F, Ausf F/8 and Ausf G.

When the StuG IV entered production in late 1943 and early 1944, the “III” was added to the name to separate it from the Panzer IV-based assault guns.  All previous and following models were thereafter known as Sturmgeschütz III.

Beginning with the StuG III Ausf G, a 7.92 mm MG34 could be mounted on a shield on top of the superstructure for added anti-infantry protection from December 1942.  Some of the F/8 models were retrofitted with a shield as well. Many of the later StuG III Ausf G models were equipped with an additional coaxial 7.92 mm MG34.  By the end of the war,  around 11,300 StuG IIIs and StuH 42s had been built.