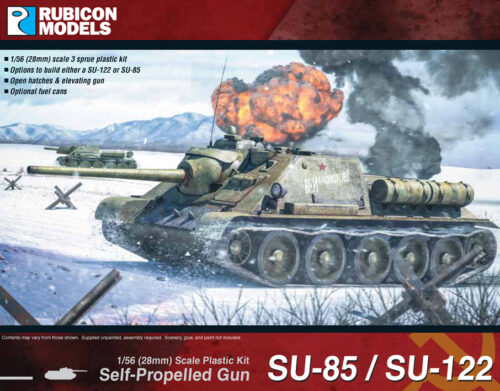 The SU-122 (from Samokhodnaya Ustanovka 122) was a Soviet self-propelled howitzer or assault gun used during World War II.  The number “122” in the designation represents the caliber of the main armament, the 122mm M-30S howitzer.  The chassis was that of the T-34.

Initial design work of a prototype U-35 assault gun, armed with the 122mm howitzer and built on the T-34 medium tank, was completed in August 1942.  The project emphasized minimizing modifications to the platform and the howitzer.  It used the same chassis, superstructure, engine and transmission and was armed with a new 122mm M-30S howitzer.  The U-35 entered service with the Red Army as the SU-35 (later renamed SU-122).

SU-122 production began in December 1942 with 27 vehicles built that month.  The original plan for production beyond that point was to produce 100 SU-122s each month.  Production continued until the summer of 1944, by which time a total of about 1,150 SU-122s had been built.

The SU-85 (Samokhodnaya Ustanovka 85) was a Soviet casemate-style self-propelled gun used during World War II, based on the chassis of the T-34 medium tank.  Earlier Soviet self-propelled guns were meant to serve as either assault guns, such as the SU-122, or as tank destroyers; the SU-85 fell into the latter category.  The designation “85” signifies the bore of the vehicle’s armament, the 85mm D-5S gun.

Based on the SU-122 chassis, SU-85 entered production in mid-1943, with the first vehicles reaching their units by August.  When the up-gunned T-34/85 medium tank entered mass production in the spring of 1944, there was no point in continuing production of a tank destroyer without superior firepower, so SU-85 production was stopped in late 1944 after 2,050 vehicles had been produced.  It was replaced on the production lines by the SU-100 tank destroyer, armed with the more powerful 100mm D-10S gun.