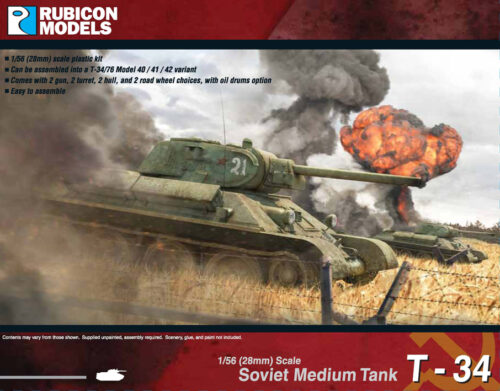 The T-34 was a Soviet medium tank which had a profound and permanent effect on the fields of tank tactics and design.  First deployed in 1940, it has often been described as the most effective, efficient, and influential design of World War II.  At its introduction, the T-34 possessed the best balance of firepower, mobility, protection, and ruggedness of any tank.  Its 76.2 mm (3 in) high-velocity gun was the best tank gun in the world at that time; its heavy sloped armour was impenetrable by standard anti-tank weapons; and it was very agile.  Though its armour and armament were surpassed later in the war, when they first encountered it in battle in 1941 German tank generals von Kleist and Guderian called it “the deadliest tank in the world.”

The T-34 was the mainstay of Soviet armoured forces throughout World War II.  The design and construction of the tank were continuously refined during the war to enhance effectiveness and decrease costs, allowing steadily greater numbers of T-34s to be fielded despite heavy losses.  It was the most-produced tank of the war, over 33,805 were produced.

19 in stock (can be backordered)