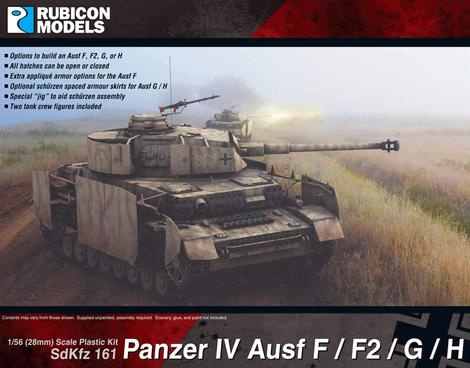 In April 1941, production of the Panzer IV Ausf F started. It featured 50mm single-plate armor on the turret and hull, as opposed to the appliqué armor added to the Ausf E with a further increase in side armor to 30mm. With the extra weight, track width was increased from 380 to 400mm to reduce ground pressure. The wider tracks also facilitated the fitting of track shoe “ice sprags” and the rear idler wheel and front sprocket were modified. A total of 471 Ausf F (later temporarily called F1) tanks were produced from Apr 1941 to Mar 1942.

On May 26 1941, mere weeks before Operation Barbarossa, it was decided to improve the Panzer IV’s main armament to a 50mm PaK 38 L/60 gun. Within months, the shock of encountering the Soviet T-34 medium and KV-1 heavy tanks necessitated a new much more powerful tank gun. In Nov 1941 the decision to up-gun the Panzer IV to the 50mm gun was dropped, and instead upgraded to a 75mm anti-tank gun design later known as 7.5cm KwK 40 L/43. The Ausf F tanks that received the new longer KwK 40 L/43 gun were temporarily named Ausf F2. Three months after beginning production, the Ausf F2 was renamed Ausf G. During its production run from Mar 1942 to Jun 1943. The Ausf G went through further modifications. On Mar 19 1943, the first Panzer IV with Schürzen skirts on its sides and turret was exhibited. In April 1943, the KwK 40 L/43 was replaced by the longer 75mm KwK 40 L/48 gun, with a redesigned multi-baffle muzzle brake and improved recoil efficiency. A total of 1,687 Ausf G were produced.

The next version, the Ausf H, began production in Jun 1943. This was up-armoured and had a reinforced final drive. Higher gear ratios were also introduced. To prevent adhesion of magnetic anti-tank mines by the Allies, zimmerit paste was added to all the vertical surfaces of the tank’s armor. A total of 3,774 Ausf H were produced.