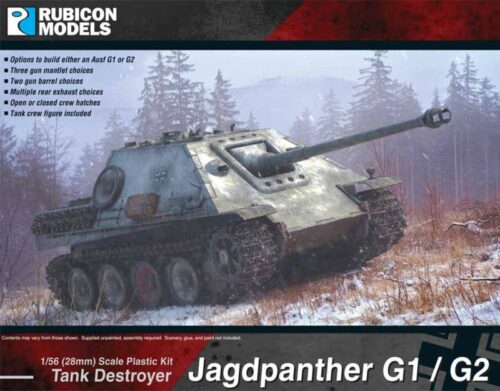 The SdKfz 173 Jagdpanther “hunting panther” was a tank destroyer built by the German army during World War II based on the chassis of the Panther tank.  It entered service in 1944 during the later stages of the war on the Eastern and Western Fronts.  The Jagdpanther combined the 8.8cm PaK 43 cannon, similar to the main gun of the Tiger II, and the armour and suspension of the Panther chassis.  The Jagdpanther had a good power-to-weight ratio and a powerful main gun, which enabled it to destroy any type of Allied tank.  Based on the existing Panther Ausf G chassis, the vehicle did not suffer too many mechanical problems.  It was manned by a crew of five: a driver, radio-operator, commander, gunner and a loader.
There were two main variants.  The earlier G1 (1944 model) had a small welded main gun mantlet, one piece PaK 43/3 gun, a modified Panther Ausf A engine deck and two vision openings for the driver.  The G2 (1945 model) Jagdpanther used a Panther Ausf G engine deck, a larger gun mantlet bolted externally and a two-piece KwK 43/4 L/71 gun.  Some later G1 models may have possessed G2 features such as the larger G2 mantlet because changes to the design were implemented gradually and lack of spares turned many Jagdpanther into “hybrids”.
Early Jagdpanthers had two vision openings for the driver, whereas late versions had only one. The main gun originally had a monobloc gun barrel, but from May 44 onward it was gradually replaced by a two-part barrel which was more economical as barrel wear was not even.  The other main difference was the relocation of external tool stowage from the sides of the vehicle to the engine deck and rear hull.  This tool arrangement was recommended by schwere Panzerjäger Abteilung 654, based on their experience in Normandy, and adopted for production.   A total of 415 Jagdpanthers were produced from January 1944 until the end of the war.