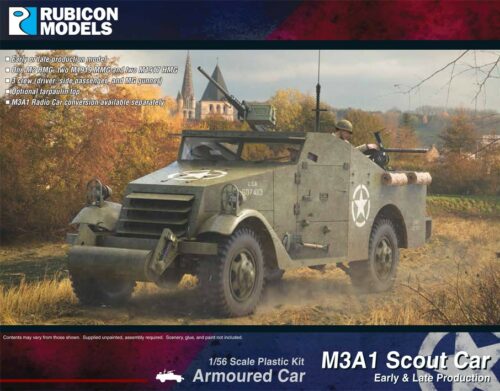 The M3A1 Scout Car (also known as the White Scout Car in British Commonwealth service) was an American-produced armoured car that saw wide service during WW2 and beyond.  The M3A1 Scout Car was a machine gun armed lightly armoured open topped four-wheel drive vehicle designed to be used in a reconnaissance role. The vehicle was crewed by a driver and commander, while there was seating for six additional occupants in the rear.

The M3A1 Scout Car was typically armed with a .50 cal M2 Browning HMG and one or two .30 cal M1917 Browning HMG (early variant) or M1919 Browning MMG (late variant). All were mounted on a skate rail upon which the pintle mounts could be moved.  Due to its open top, the occupants were also able to employ their personal weapons.

The M3A1 Scout Car was used by cavalry units of the US Army during the North African Campaign and the invasion of Sicily, being employed for reconnaissance, screening and as an armored command vehicle.  It was fast and reliable, making it popular with its crews.  Throughout 1943 most US Army units replaced the M3A1 with the M8 armored car and the similar M20 Utility Car, although the M3A1 was retained for rear area security and convoy escort duties.  A small number of M3A1s were employed in Normandy and used by the US Marine Corps in the Pacific theater.

A total of 11,401 M3A1 Scout Cars were allocated for supply to US allies under lend-lease, 6,987 were supplied to the British Commonwealth, 3,310 to the Soviet Union and 104 to the Chinese Nationalist Army.  Some were also supplied to Free Belgian, Free French, Czechoslovak and Polish units.  A grand total of 20,918 were produced between 1939 and 1944.

In British Commonwealth service, the White Scout Car was regarded more as an armored truck and was used by British Commonwealth forces in every theatre they fought in except Burma.  In Red Army service, the M3A1 was used as an armored personnel carrier and remained in widespread service throughout the war.  The Chinese Nationalist Army received M3A1 Scout Cars from 1942 and used them throughout the Second Sino-Japanese War and the Chinese Civil War.

After the war, many vehicles were sold, mostly to Asian and Latin American countries while they remained in Soviet service until 1947.  A few vehicles were used by Israel in the 1948 Arab–Israeli War.  France employed its M3A1s in the First Indochina War and the Algerian War.  By late 1990 the only country with the M3A1s remaining in service was the Dominican Republic.