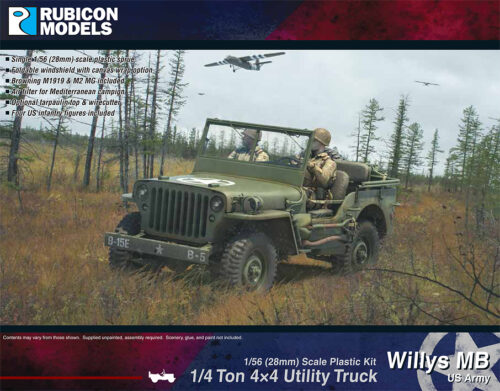 The Willys MB (commonly known as a Jeep or jeep, formally as the US Army Truck, ¼ ton, 4×4) is a four-wheel drive utility vehicle that was manufactured during WW2.  It is also one of the first military vehicles mass-produced in the US.

The Willys MB (and Ford GPW) US Army jeep is the culmination of war-time ingenuity, standardization and strategic personalization for transport of personnel and cargo.  Soon to become the ubiquitous, “world-famous” jeep, the Willys MB and Ford GPW models were very effective on the ground, with many standardized features such as 6.00×16 tires, 60 horsepower at 4,000 rpm, a gasoline can bracket on the left rear, provisions for trailer lights, spark interference suppression, a blackout light system, twin top bows and sealed spring shackles.

Prior to the production of the MB/GPW, other attempts were made to satisfy the Army’s need for a light utility vehicle including the first prototype presented by the American Bantam Car Company.  Nicknamed the “Blitz Buggy”, this vehicle concept which was the first bid accepted by the Army, as it satisfied the Army’s Ordnance Technical Committee specifications.  While the “Blitz Buggy” did satisfy these requirements, Bantam was not able to deliver with the fiscal strength or production capability needed to win the contract with the War Department.  As a result, Ford and Willys were asked to product their own pilot models for testing, the results of which would determine the contract.

The original pilot models were submitted and named accordingly.  The Willys Quad by Willys Overland, the Ford Pygmy by Ford and the BRC60 by Bantam were accepted and orders were given for 1,500 units per company.  During these pre-production runs, each vehicle was re-named.  The Willys Quad became the “MA”, the Ford Pygmy became the “GP”, and the “BRC60” became the “BRC40”.  By July of 1941, the War Department, needing standardization, selected Willys-Overland to fulfill its contract, on account of the MA’s powerful engine, silhouette, low bid, and because of the company’s ability to fulfill production needs, ordering another 16,000 vehicles.

Absorbing some of the design features of the Bantam and Ford entries, the Willys “MA” was then renamed the Willys “MB”, and featured the powerful “Go Devil” engine and a welded flat iron “slat” radiator grille (which was later replaced by a stamped grille in March 1942).  By October 1941, due to an increased demand for production, Ford was contracted to assist Willys-Overland and changed their model’s name from “GP” to “GPW”, with the “W” referring to the “Willys” licensed design.  During WW2, Ford produced some 280,000 of these vehicles.  A total of 361,339 (between Nov 18, 41 and Sep 21, 45) were build.