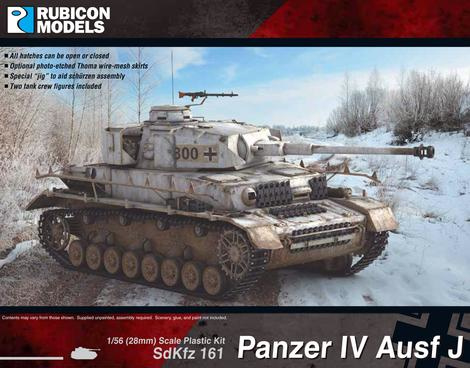 The Panzer IV Ausf J
Despite addressing the mobility problems introduced by the previous models, the final production version of the Panzer IV, the Ausf J, was considered a retrograde from the Ausf H. Born of necessity to replace heavy losses it was greatly simplified to speed production. The electric generator that powered the tank’s turret traverse was removed so the turret had to be rotated manually. The turret traversing mechanism was modified and fitted with a second gear which made hand-operation easier when the vehicle was on sloping terrain. The resulting space was later used for the installation of an auxiliary 200-litre fuel tank; road range was thereby increased to 320km. The remaining pistol and vision ports on the turret side hatches were removed and the engine’s radiator housing was simplified by changing the slanted sides to straight sides. In addition, the cylindrical muffler was replaced by two flame-suppressing mufflers.

On Jun 1944, German design office Waffen Prüfen 6 (Wa Prüf 6) had decided that because bomb damage at Panzerfirma Krupp in Essen had seriously jeopardized tank production, all plates which should have been face-hardened for the Panzer IV were instead made with rolled homogeneous armour plate. By late 1944 zimmerit was no longer being applied to German armored vehicles and the Panzer IV’s side-skirts had been replaced by wire mesh. A total of 1,758 Ausf J were produced before the war ended.