View basket “M40DU-VHC-02-Landsverk crew” has been added to your basket. 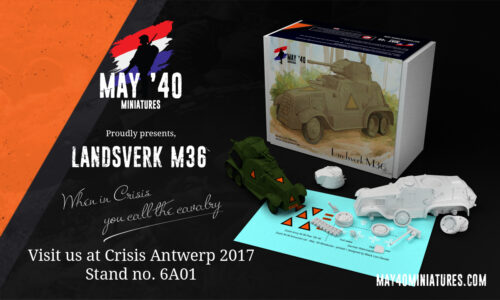 This kit contains enough parts to build one complete armoured car. The decal sheet allows you to build either 1 out of 2 Dutch versions or 1 out of 3 German versions.

Contents may vary from shown. Supplied unpainted, superglue and tools required for assembly.

Scenery, glue, paint and figures are not included.

In December of 1934 an order was placed with the Swedish company AB Landsverk for 12 Landsverk L181 armoured cars and one spare chassis. This armoured car would be named the M36. It had a Daimler-Benz chassis with a Swedish body and turret. Also 2 extra modifications were added, the 20mm canon was changed to a 37mm gun and an extra machinegun position was added to the back armour.
They saw action during the 5 days war in 1940, most notably at the airfield Ypenburg and on the Veluwe against the SS Leibstandarte Adolf Hitler and the 227th. After the capitulation many of the Landsverks were used by the Germans as “beute”.
Details: