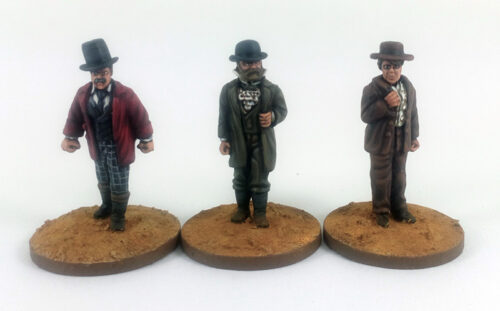 Set of three metal civilian models to populate your town and get gunned down in the crossfire!. Models supplied unpainted. Sculpted by Darren Edwards, painted by Artmaster, based by GEG.

Stuart L. E. Wheatley is the ruthless and cunning owner of the Sassy Gal. Wheatley has made it up the hard way to build his boardwalk empire. When it comes to competition Wheatley has remembered every lesson of his past.  He has been as ruthless as he was cunning and even thought by many to be the paymaster of the road agents that prey on weak travellers on the roads out of town.  Rumours persist he is also responsible for disappearances and so many of the unfortunate, possibly not so, accidental recent deaths.  Almost an instinctive winner he has had to tighten his grip of late, but maybe he has now met his match with the advent of ‘Slick’ Dan Pottinger’s gambling parlor ‘The Blue Canary’.  It doesn’t help that the tiresome daughter of dead Jim Rogan, ‘Kat’ is still doing well with her ‘Rogan’s Bar’!

William E Farnum is the Mayor of Dead Man’s Hand and is thought to be a puppet of Wheatley. He’s weak willed and sycophantic and can often be seen scraping around various upstanding citizens of Dead Man’s Hand.

Caleb Harper is new to town and rents a pitch for his Dry Goods business from Stuart Wheatley. From the northeast, Harper took his earnings from his time in the Union army and struck out west. He hooked up briefly with Calamity Jane and the pair travelled together to Dead Man’s Hand. Some think he’s a tool of Wheatley despite his good mannered demeanour and diligent work ethic.