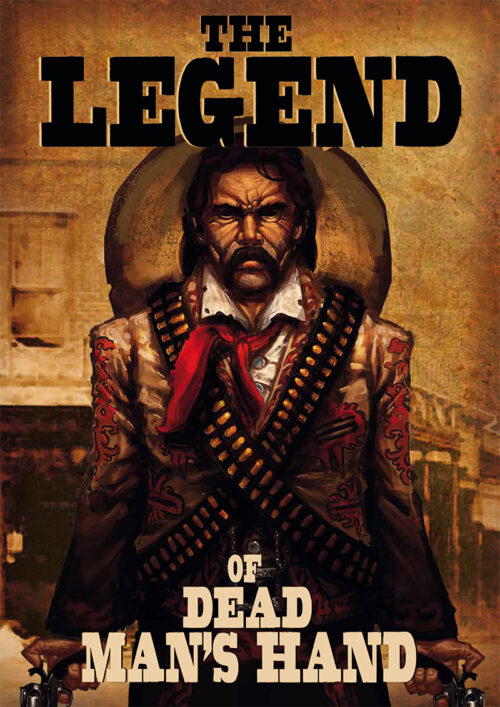 The Legend of Dead Man’s Hand is the campaign source book in which players take a gang of no good crooks or a posse of untried but honest, good men and endeavour to make their mark on the Old West. Rivals develop business schemes or criminal enterprises, gain skills and experience, expand the size of their respective bands, and engage in plenty of Wild West gunplay in their rise to glory or descent into an early grave (or the bottom of a bottle).

You need a copy of the Dead Man’s Hand rule book to use this source book.

Setting Up Your Gang

Starting gangs in The Legend of Dead Man’s Hand.

Driven and enterprising men in the Old West won their fame (or infamy) through ruthless exploitationof people and resources. In the Legend of Dead Man’s Hand, gangs participate in business, political andcriminal schemes to increase their influence and wealth, represented by their Reputation score. Each gang has access to “common” schemes and their own specific schemes as well, such as Cattle Drive (Cowboys), Bounty Hunters (Pinkertons) and Reign of Terror (Desperados).

Going “out of action” in a game of Dead Man’s Hand is not necessarily fatal. Characters may just be lightlywounded, their courage failing under intense fire or suffering from a serious but non-life threateninggunshot. Of course, it may also mean that the target is dead and being measured up for a coffin as hisstill-warm body still twitches. This chapter details all the effects of injuries.

After each scene played, the gangs are awarded Fame points which are spent on hiring more guys, gaining experience and skills, buy equipment and developing new schemes.

As your characters gain experience, will they write a new chapter in the history of the Wild West, or will they find an early grave or the bottom of a bottle…

There are common and citizen skills, special skills available to each gang type (and only that gang type), plus the Legend of Dead Man’s Hand skill table for the most accomplished and ruthless of men.

Each campaign turn is rouynded off with an event. Sometimes minor, sometimes nothin’, sometimes absolute carnage…

This sections details different decks and how the common and gang specific cards affect gameplay.

Two named characters plus guidelines on making your own.