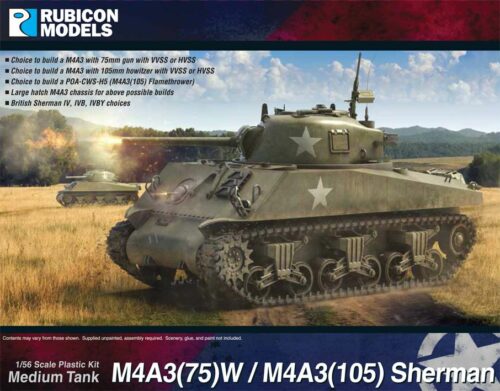 The M4A3 Sherman would be the base for what would be the final Sherman in US Army use, seeing action all the way out to the Korean War in US Army hands.  This tank had a welded hull just like the M4, M4A2, and M4A4, but used a new motor.  The Ford GAA V8, this motor took some time for its bugs to be worked out, the US Army didn’t use it until it was ready for serious production.  When it was, it became the preferred US Army version of the tank in both the 75mm and 76mm forms.  It would see all the improvements, and be the first hull type to take the HVSS suspension system into combat for the US Army.  It would be produced in three factories with all turret types, 12,596 built in total between June 42 and June of 45.

The first run of M4A3 tanks were small hatch tanks made by Ford, most were used in the USA for training, and many never saw combat.  Some were rebuilt and sent to Europe to help make up for higher than expected tank losses after the Normandy Campaign.  These are the rarest version of the M4A3 Sherman in Europe, but they are pretty common around the Midwest USA as monument tanks.

The M4A3(75)W  had a 75mm M3 gun, 47° glacis with large driver hatches.  It shifted ammunition lockers to hull floor in water-glycol jacketed lockers to decrease risk of fire, known as “wet stowage”.  A total of 2,420 were build between February and December 1944, and an additional of 651 being built as M4A3(75)W HVSS between January and March 1945.