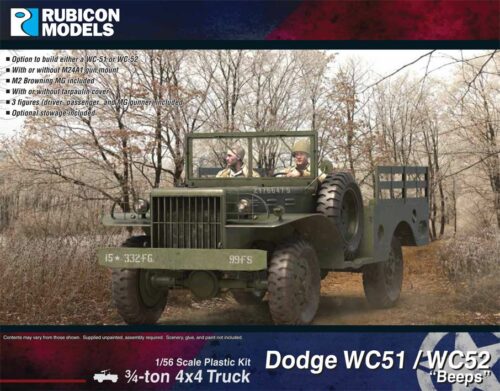 The Dodge WC series, sometimes nicknamed “Beeps”, was a range of light military trucks produced by Dodge during World War II.  The series included weapon carriers, telephone installation trucks, ambulances, reconnaissance vehicles, mobile workshops and command cars.  They were replaced after the war by the Dodge M-series of vehicles.  WC was a Dodge model code: W for 1941 and C for half-ton rating.  The C code was retained for the ¾ ton and 1½ ton 6×6 Dodges.

The Dodge WC series were essentially built in two generations.  From 1940 to early 1942, almost 82,400 of the ½-ton 4×4 Dodge trucks were built — initially called the VC series, but the great majority (from 1941) in the WC series, and in more variants.  Contrary to what the nomenclature would suggest, the 1941 WC models were a direct evolution of the 1940 VC models, retaining the US Army’s G-505 Ordnance Corps Supply Catalog number.

The Dodge G-502 ¾ ton 4×4 trucks were first introduced in late 1941.  Standard vehicles in the ¾ ton 4×4 class were the WC-51 / WC-52 Weapons Carrier, Telephone Installation Trucks, WC-53 Carryall, and the WC-54 Ambulance.  In the cargo trucks, the WC51 was identical to the WC52 but did not have the front bumper-mounted winch.

In 1942, the payload was uprated, and the trucks grew into the G-502 ¾-ton 4×4 Truck (Dodge) and the G-507 1½‑ton 6×6 personnel and cargo truck (Dodge) — confusingly retaining the Dodge WC model code.  Although the 3⁄4‑tons featured significant design improvements, they did retain some 80% interchangeable components and service parts with the 1⁄2‑ton models — a vital Army requirement, for field maintenance and operability of the trucks.

Dodge was the US Army’s main supplier of 1⁄2‑ton trucks, and its sole supplier of both ¾‑ton trucks and 11⁄2‑ton 6×6 trucks in World War II.  With over a quarter million units built through August 1945, the G-502 ¾‑tons were the most common variants in the WC‑series.